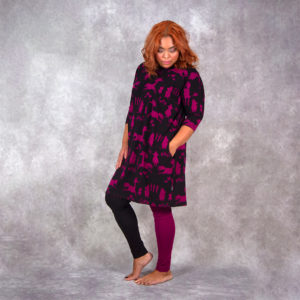 Once upon a time there was a HuiGee idea…

HuiGee originates from the dreams of two Finnish women entrepreneurs, their impossible imagination, astounding ideas, giggly laughter and hilarious humor – but most of all from important values. The two women decided to start something that could change the world piece by piece, or rather by piece of clothing at a time. This is how Huigee Organics Oy, most commonly known by HuiGee, was born in 2017.

The fashion world of the modern times is unscrupulous and fierce. The fast fashion trend has held on to the dominion of the clothing industry for years now and our environment cannot sustain it. The clothing production requires great amounts of clean water, and the seamstresses and tailors get very little pay while working in unsafe environments. The responsibility for finding the origins of the clothing falls to the consumers, but we at HuiGee wish to change this very fact. Our dream is to bring the ecological values and the green footprint to our clothes, and that is where we based our first steps on as clothing designers and manufacturers. One should be allowed to wear their clothes for a long time, enjoy their great quality and recycle them through many people afterwards. HuiGee’s clothes are made to last from one generation to another. Every piece of clothing is made with warm hearts, consideration and great care.

In 2016 the idea to get a license from Moomin Characters started in order to create Moomin-themed ecological clothes made from organic cotton. The idea had been brewing on for a long time since there was very little clothing available that had illustrations from Tove Jansson’s older original works, such as illustrations from Moomin books. HuiGee’s girls had been working with Moomin products for many years by then and the longing for the old illustrations on their textiles was a dream of theirs. Once the licensing matters had come to an agreement and the contract with Moomin Characters had been made, the first ideas of Moomin by HuiGee -collection were created.
The clothing collection is designed by a Finnish long-time clothing designer Camilla Mikama and some of the clothes are designed together with the entire team. The first Moomin patterns Moomin the Hobgoblin’s Hat and Moomin Joy were born inspired by Tove Jansson’s original artwork. After the beginning, many other patterns have been created and each of them has their own story.
After many, many, and once again many examples, models, prototypes and thousands of sweat droplets later the first HuiGee’s clothing collection was born.

We at HuiGee won’t approve of anything other than the perfect piece of clothing – because the joy in your everyday life is close to our hearts.

Although a great amount of work has already been completed, a lot is yet to come. We are ready to tackle the future challenges, and we will strive to actively improve and perfect our work, services and products. Our licensing contract with Moomin Characters gives us the change us to realise and create more novel, previously unseen products with Moomin illustrations.

Thank you for joining this journey with us! It is thanks to you that we get to make our dreams come true, now and in the future.